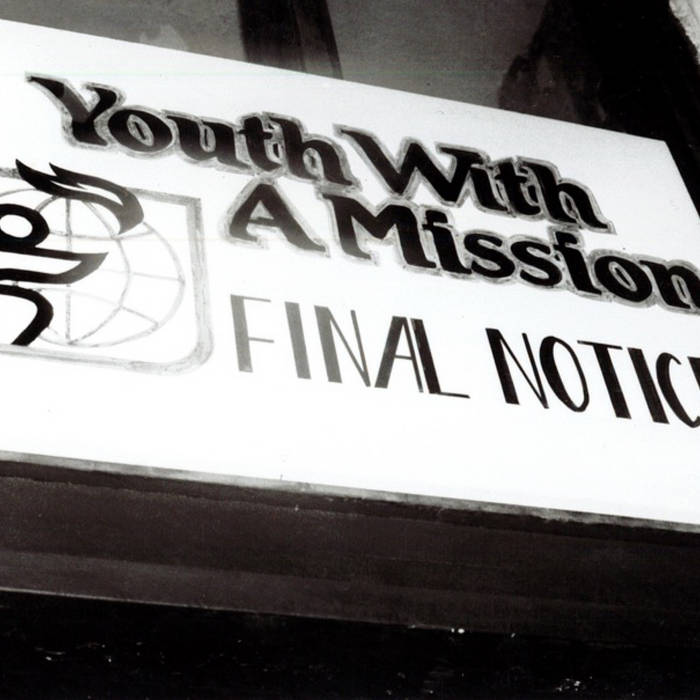 Final Notice was the Youth With A Mission (YWAM) base in Vancouver from 1988-89. Situated at Granville and Helmcken in one of the darker corners of a spiritually dark city, the Final Notice mission emerged from a five-month School of Evangelism (SOE) held in a Reformed church in East Van. Besides classes and ministry to street youth, our SOE also included a month in Chicago with Jesus People USA and two months of outreach (preaching, music ministry, puppetry) in India.

During that selfsame SOE the Metal Monks were born, serving as the original house band for our many services, as well as leading "Feast for the Least" concerts and playing any venue amenable to Monk Metal. In Chicago the band recorded the four-song EP "When the Son Comes Down" (tracks 1-4, remastered for this collection).

The tracks have been in the upkeep of Doug Peterson, archivist par excellence. Besides schlepping the tapes around over his journeyman career he has moreover retained the only copies of tracks 5-14.

Behind the board for tracks 6, 7, 11-13 was Randy "Bear" Lacey, in my humble opinion the dearest treasure to emerge from the crucible that was Final Notice. His presence downtown pre-dated the SOE as one of the first street kids with whom Victor and Nathan initially connected. I'm proud to say of Randy and Doug that we've stayed friends and comrades-in-arms these 33 years.

With regards to his career as a techie, in Randy's own words, "I believe I was voluntold I would be the sound guy for the wandering minstrels aka The Metal Monks/Final Notice. That's a lot of blame if it sounds terrible. I'm ok with it." (For the record, we're ok with it too, Brother. You did well).

Returning to the Metal Monks and their short-lived, illustrious rise then fade into oblivion: Lane left the band, Tim took his place on acoustic guitar, then Nathan and Tim both left, leaving Victor and Sean, the latter of whom was unceremoniously replaced on lead vocals by the superior-singing Scott from Montreal.

Sean dropped back to straight bass, joined by Jim on electric guitar and Roxanne on keyboards. They, along with Victor on drums and Scott on lead vox/acoustic guitar, formed the Final Notice Band (of which no known recordings are extant) and were all part of our second (and last) SOE.

The Metal Monks -- full of vision and grand aspirations (elaborated upon in Doug's interview, track 14) -- officially and without fanfare, ceased to be in early '89. The Final Notice Band, which in a sense morphed out of the Monks, played together into the Spring of '89 when the base closed. For many, it marked the end of an era. Much pain was still to follow.

Album art: Final Notice sign above the door of our base, drawn/coloured (red and black indelible ink on white) by Sean O'Leary